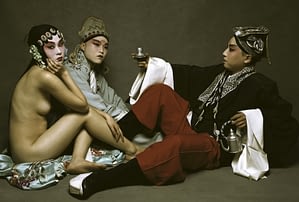 Pan Yue was born in Beijing China in 1968 and graduated from the Oil Painting Department of the Central Academy of Fine Art in 1992. Be it in painting or photography, he often explores characters from traditional Chinese opera. He portrays them in costume yet simultaneously out of character. For example his subjects may display costumes of opera singers, yet he places them out of context in compositions reminiscent of old western traditional masters. From Manet to Piero della Francesca, Pan Yue imposes a 21st Century oriental twist on these famous works of art .