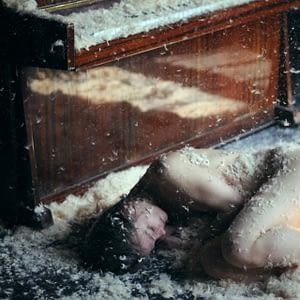 Her series Feathers was shot in a theatre room in Timisoara, working in collaboration with actors Olga Diana Török, Savescu Horia and Boris Gaza.

I have to say that it was rather chaotic, because I planned the project in only 2 days. At first I did not know what type of pictures I would take or what type of feathers I would use.

Chiru graduated from the School of Psychology and Teaching in Romania and later hopes to  combine her knowledge of psychology with photography.

For similar work involving flour suspensions you may wish to see Ludovic Florent.